Whilst thyroid fine needle aspiration biopsy (FNAB) is generally a safe and relatively simple procedure with great clinical utility, it is important to be aware of potential adverse events which may arise following the procedure. Post-aspiration thyrotoxicosis is a rare but recognised complication of thyroid FNAB (1). A small prospective study has estimated the incidence of post aspiration thyroiditis as less than 1% (2). The exact mechanism of inducing thyrotoxicosis is not confirmed. However, it has been postulated that the trauma of aspiration causes an inflammatory process, triggering the release of thyroid hormone (2). Whilst the available data on this particular complication is somewhat scarce, the observational data interestingly suggests that post-aspiration thyroiditis tends only to occur in cystic nodules rather than solid thyroid nodules (2). We present this article in accordance with the CARE reporting checklist (available at http://dx.doi.org/10.21037/aot-20-57).

A 65-year-old woman was found to be thyrotoxic when she attended pre-operative assessment for an elective right hemithyroidectomy. She had previously presented in 2014 with a right thyroid mass which was shown to be a mixed solid and cystic thyroid nodule (U2). At that time, she had opted for conservative management as she had no compressive symptoms and the thyroid mass was static in size. However, the mass gradually increased in size and was causing limitation in neck movement. She was also aware of a pressure sensation transmitted internally giving her a constant foreign body sensation.

Thirteen days prior to the pre-operative assessment, she had a fine needle aspiration of approximately 170 mL of colloid-type fluid to relieve some of the compressive symptoms. There were no immediate complications following the procedure. However, the thyroid cyst re-accumulated within a couple of hours. She was biochemically euthyroid prior to the procedure.

About eleven days following the procedure, she developed a hoarseness of voice, with a new right vocal cord palsy, presumed to be a neuropraxic event following rapid cyst refilling. A diagnostic and therapeutic right hemithyroidectomy was planned. However, at pre-operative assessment she was incidentally found to be biochemically thyrotoxic with fT4 >100 pmol/L, fT3 13.2 pmol/L, TSH <0.01 mU/L. In addition, she had a markedly elevated CRP at 237 mg/L, but in the presence of normal white blood cell count of 7.7×109 /L.

Interestingly, she was also found to have a deranged liver function test with a raised alanine aminotransferase of 203 U/L and alkaline phosphatase of 259 U/L. She was not jaundiced. Synthetic function was preserved. There were no stigmata of chronic liver disease and she was not encephalopathic. Ultrasound scan revealed some fatty infiltration of the liver. However, she had no previous liver function test or ultrasound scan of the liver. She had thyroid FNAB five years prior but did not have biochemical tests shortly afterwards.

She did not have overt thyrotoxic symptoms of excessive sweating, tremors or palpitations. However, examination revealed a resting sinus tachycardia (100–110/min) and persistent fever (≥38.0 °C). She had a slightly tender thyroid swelling filling the entire right side of the neck. There was no evidence of any thyroid eye disease. The rest of the systemic examination was unremarkable and there was no obvious source of infection.

In view of her tachycardia, fever and raised CRP, she was initially commenced on broad spectrum antibiotics for possible infection. A chest X ray excluded a pneumonia and 3 sets of blood cultures did not grow any pathogens. Despite completing a course of antibiotics, her CRP remained raised and her fever persisted. She was also started on non-selective beta blocker, propranolol for rate control.

MRI of the neck showed a large right thyroid nodule without mediastinal extension or invasive features (Figure 1). Ultrasound scan of the thyroid was also performed which revealed re-accumulation of fluid in the cystic part of the thyroid nodule (Figure 2). There was no other discrete collection or abscess formation. 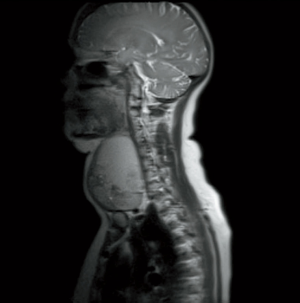 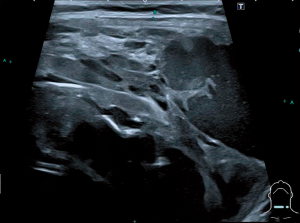 Figure 2 US thyroid shows re-accumulation of fluid in the cystic part of the thyroid nodule.

Thyroid receptor antibody was <1.0 U/L (range <1.8 U/L) thereby excluding Grave’s thyrotoxicosis. Post-procedural thyroiditis was suspected and she underwent a nuclear medicine thyroid uptake scan. This did not show any significant uptake within the thyroid. There was no focal activity to suggest an autonomous nodule (Figure 3). 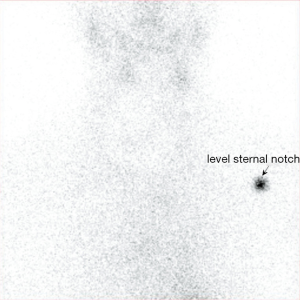 She was commenced on a reducing course of prednisolone starting at 40 mg daily which is within the initial dose range used in suppression of severe inflammatory disorders. This resulted in improvement in her symptoms including fever, voice hoarseness, tenderness and size of the thyroid swelling. It also corresponded with a progressive improvement in her biochemical parameters (Table 1).

She underwent a right hemithyroidectomy after weaning off prednisolone. The perioperative period was uneventful. The pathology showed features of a large follicular thyroid adenoma with retrogressive changes, surrounded by chronic lymphocytic thyroiditis. She eventually developed hypothyroidism and is on thyroxine replacement.

She was seen in the gastroenterology clinic about five weeks following hospital discharge. At this point, her liver function tests had returned to normal and it was thought the transient biochemical liver function derangement was a manifestation of her acute thyrotoxic state. All procedures performed in studies involving human participants were in accordance with the ethical standards of the institutional and national research committee and with the Helsinki Declaration (as revised in 2013). Written informed consent was obtained from the patient.

We report a case of a thyrotoxic thyroiditis, occurring a few days following FNAB of a mixed solid/cystic thyroid swelling. The available literature has previously suggested that this complication following FNAB only appears to occur with cystic, as opposed to solid thyroid nodules (2). However, more recently, Orrego reported on a case of a female who developed overt thyrotoxicosis 3 days following FNAB of a mostly solid, spongiform thyroid nodule (3). Therefore, larger case series and observational data are required to further clarify which specific factors may predispose to this particular complication.

In the retrospective part of the study, thyroid function tests of 500 patients with thyroid cysts were examined before and after aspiration. Five patients were found to have elevated serum thyroid hormone levels with suppressed TSH and some form of cyst recurrence after initial aspiration. In 4 out of the 5 patients, the cyst recurrence was noted to be tender or painful. Similarly, the same 4 patients had a significantly elevated CRP level, which is a marker of acute inflammatory response (4). Low grade fever was also reported in 2 of the patients, further suggesting a potential inflammatory aetiology.

Interestingly, overt symptoms of thyrotoxicosis (palpitations and sweating) were only reported in 1 out of the 5 patients. For this reason, it has been postulated that post-aspiration thyrotoxicosis may be underdiagnosed and go unnoticed due to the lack of overt thyrotoxic clinical symptoms (2).

The management of each case of post-aspiration thyrotoxicosis in the study varied, with two patients undergoing repeated cyst aspiration, one patient treated with oral dicloxacillin, one patient treated with indomethacin and one patient treated with both indomethacin and prednisolone. The specific trajectories of CRP and thyroid function tests were not reported for each individual case and the duration of thyrotoxicosis ranged from 13 to 30 days. Therefore, this still leaves unanswered questions on what is the optimal treatment for managing post-aspiration thyrotoxicosis and indeed, whether comparable outcomes would have been achieved using a purely supportive/conservative approach. Our reported case bares several similarities to those previously reported and further adds to our knowledge of this complication. Our patient presented a few days following aspiration of a mixed solid/cystic thyroid nodule with tender cyst recurrence and biochemical thyrotoxicosis. She also had an elevated CRP and persistent low-grade fever, suggesting an acute inflammatory response. After infection was excluded, she was treated in the acute stage with a reducing course of corticosteroids over one month. A marked fall in serum CRP, free thyroxine and normalisation of temperature were observed promptly following commencement of corticosteroids. Our decision to treat with corticosteroids was influenced by need to rapidly improve symptoms including compressive symptoms causing vocal cord palsy and also provide assurance as to the cause of her clinical presentation.

More data is required to determine the natural clinical course of post-aspiration thyrotoxicosis, and to quantitatively assess the effectiveness of corticosteroids in hastening recovery.

The mechanism by which post-aspiration thyrotoxicosis occurs is still debated. Kobayashi et al. proposed that the trauma of aspiration may cause a thyroiditis, coupled with leakage of thyroid content into the cyst, followed by release of hormone into the systemic circulation (2). Our case would be in support of such a mechanism. In our case, the significantly elevated CRP, low grade fever, reduced uptake on nuclear scan and also the histological findings of chronic lymphocytic thyroiditis all suggest an inflammatory aetiology. An alternative mechanism could be that of “palpation thyroiditis”. This has been described previously in the context of parathyroid surgery, whereby vigorous palpation of the thyroid gland during surgical exploration potentially causes damage to the follicular epithelium and subsequent inflammatory process or by rupture of individual thyroid (5). It is possible that the post-aspiration thyroiditis which we describe could, in fact be a result of the mechanical trauma of vigorous palpation that is required prior to aspiration, rather than the aspiration itself.

We also report the interesting complication of transient vocal cord paralysis which coincided with the post-aspiration thyroiditis. This is a rare complication but has previously been described. Tomoda et al. reported an incidence of ipsilateral vocal cord paralysis occurring 24–48 hours after FNAB of 0.036% (6). Proposed mechanisms of injury to cause vocal cord paralysis include stretching of the recurrent laryngeal nerve from haematoma, and local inflammation and fibrosis following bleeding and trauma (1).

A range of biochemical liver abnormalities in association with hyperthyroidism have previously been described in the literature (7). In our case, the patient had a mixed transaminitis, raised alkaline phosphatase and sonographic evidence of fatty liver infiltration. The biochemical abnormalities appeared to resolve in conjunction with resolution of the thyroiditis. The most common pattern of abnormality appears to be hepatocellular injury/transaminitis. However, a range of abnormalities have been observed ranging from mild biochemical abnormalities to clinically significant cholestatic jaundice (7-9). Previous observational studies and case reports have suggested that achieving euthyroidism is followed in most cases by normalisation of liver biochemistry (7,10-12). The exact mechanism of liver injury in thyrotoxicosis is likely multifactorial, given the wide range of severity and patterns of liver dysfunction observed. Rat models have previously shown excess T3-induced apoptosis of hepatocytes (13). Interestingly, most cases of thyrotoxicosis-associated liver dysfunction appear to show some degree of fatty liver infiltration (7,8,13). Again, this was observed in our case report. Other factors which are often implicated are heart failure in the context of thyrotoxicosis, and drug-induced liver injury secondary to antithyroid medications. However, this was not relevant in our case report.

Reporting Checklist: The authors have completed the CARE reporting checklist. Available at http://dx.doi.org/10.21037/aot-20-57

Conflicts of Interest: All authors have completed the ICMJE uniform disclosure form (available at http://dx.doi.org/10.21037/aot-20-57). The authors have no conflicts of interest to declare.