A case report of an acute respiratory distress syndrome revealing a primary Hodgkin’s lymphoma of the thyroid: the role of primary surgery

Hodgkin’s lymphomas (HLs) are one of the most frequent lymphomas in the Western countries. When primarily localized in the thyroid [primary thyroid lymphoma (PTL)], it is very rare that the disorder it causes presents no clinical and paraclinical specificities (1). This type of localization does not exceed 7% of all the diagnosed lymphomas (2). This rare disorder accounts for less than 5% of all thyroid malignancies and up to 7% of all extra nodal lymphomas (1-4). The surgical management of PTL remains a matter of debate in literature for the role of primary surgery. In this paper, the authors report a new observation of PTL (an isolated and primary localisation of HL in the thyroid gland), highlight the clinical issues and the importance of extemporaneous exam in this case report. We present the following article in accordance with the CARE reporting checklist (available at http://dx.doi.org/10.21037/aot-20-15).

A 19-year-old woman without medical history, including no thyroid disorders symptoms, had been admitted to emergency department for airway compression symptoms. She was transferred at resuscitation unit because of increasing dyspnea. The symptomatology seemed to go back to 3 months ago with a swelling of the neck that was quickly increasing, breathlessness, and dysphonia. She started complaining of low-grade fever, pruritus, night sweats and unencrypted weight loss. On physical examination, she was hemodynamically stable. Our patient presented a huge anterior cervical mass painless, with an 8-centimeter length axis along which peripheral lymphadenopathy that was hard in consistency was identified and induced a disappearance of the subclavicular fossa. The cervical ultrasonography showed an enlarged left thyroid lobe and an isthmus having heterogenous parenchyma with multiple and peripheral lymphadenopathy infiltrating the lateral vascular axis of the neck. Our patients presented normal thyroid function. Patient underwent fine-needle aspiration cytology (FNAC) of both thyroid lesion and lymphadenopathy but it was not contributive. A surgical treatment was then initiated. The surgical approach was a cervico-manubriotomy (Figure 1). Intraoperatively, we found a tissue mass of 70 mm × 40 mm at the left of the lateralized thyroid compartment, plunging into the middle and the anterior mediastinum, with small left lateral cervical lymphadenopathy (Figure 2). 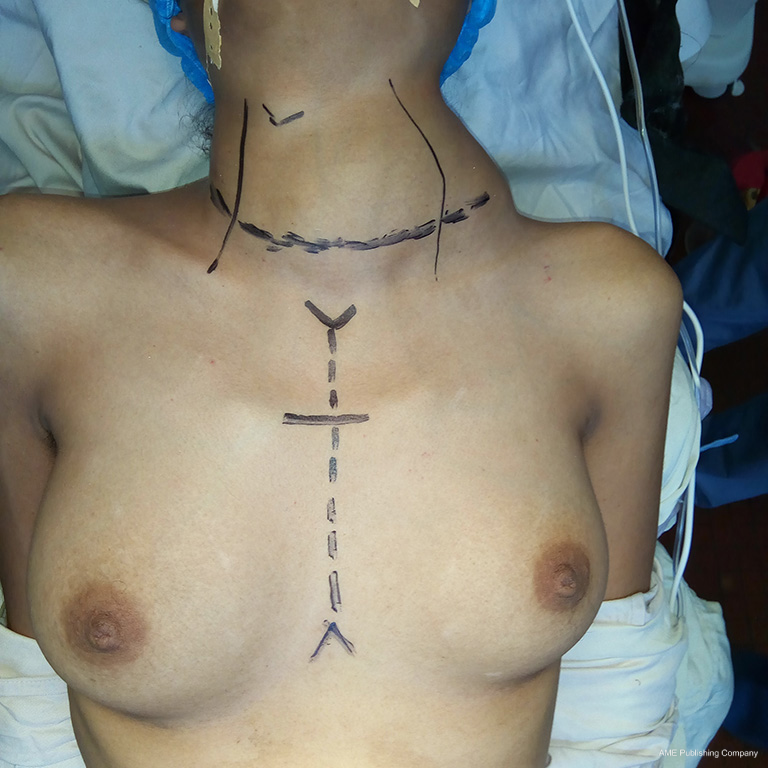 An atypical resection (optimal debulking surgery) of the cervical mass at the thoracic level, followed by a left lobectomy without lymphadenectomy was performed. The extemporaneous exam during surgery revealed a malignant tumor infiltration suspicious of a Hodgkin lymphoma. The perioperative period was uneventful. Definitive histopathological examinations revealed a diagnosis of mixed cellularity typical of a HL (typical Reed-Sternberg cells mixed with lymphocytes) located at the thyroid gland (Figure 3). On the basis of clinical symptoms, diagnostic imaging examinations (ultrasonography and X-ray) and bone marrow assessment classified her disease as stage IIE according to the Ann Arbor classification. The patient was subjected to combined systemic chemotherapy (8 cures of ABVD protocol with Adriblastine 25 mg/m2, Bleomycin 10 mg/m2, Vinblastine 6 mg/m2 and Dacarbazine 375 mg/m2) then she received radiation therapy. With treatment, a favourable tumor response was clinically noticed. No evidence of the disease recurrence was noticed also during the 30 months of follow-up period (Figure 4). 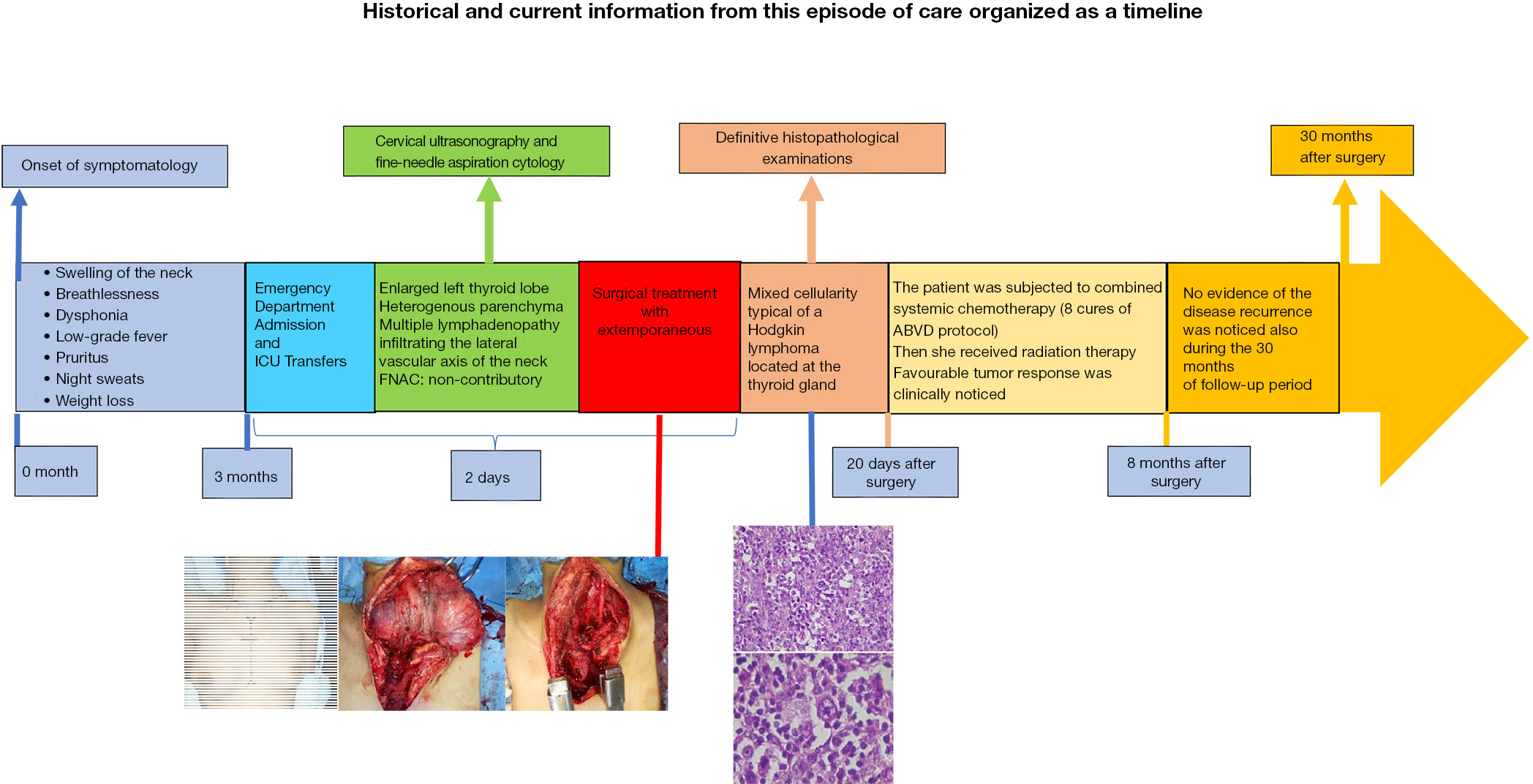 Figure 4 Historical and current information from this episode of care organized as a timeline.

All procedures performed in studies involving human participants were in accordance with the ethical standards of the institutional and/or national research committee(s) and with the Helsinki Declaration (as revised in 2013). Written informed consent was obtained from the patient for publication of this manuscript and any accompanying images.

Primary thyroid Hodgkin’s lymphoma (PTHL) is a rare entity defined as lymphoma involving either the sole thyroid gland or both the thyroid gland and the regional lymph nodes without contiguity (1,2,5,6). There are few reports of primary extra-nodal involvement as presented in our case in literature. Only 5% of HLs develop in extra-nodal sites including the head and neck, which represent a third-place localization with or without concomitant nodal involvement (5). Our study enriches the data of the literature as for the management of the PTHL. The HL is a malignant lymphoproliferative disease, characterized by the presence of Reed-Sternberg cells and their inflammatory infiltration (2,3). The correlation between an PTL and an autoimmune thyroiditis such as the Hashimoto’s thyroiditis (HT) is well recognized in literature as an underlying risk factor conducting to its development between 27% and up to 100% in most cases (1-3,5,6). Other risk factors include the socioeconomic status (high for nodular sclerosis and low for mixed cellularity and lymphocyte depleted subtypes), the human herpesvirus 6 (HHV-6), the Epstein-Barr virus (EBV) infection, an immunosuppression, a genetic background (HLA-DRB1 and HLA-DQB1 genotypes), and other autoimmunity diseases (rheumatoid arthritis, systemic lupus erythematosus, sarcoidosis) in the genesis of the HL of thyroid (3). The thyroid lymphoma development needed a period estimated between 20 to 30 years (5). The young age and the absence of thyroid disorders in background history of our patient made our clinical case more interesting and rarer. In our case, although an increased size and a formation of packages were found in the lymph nodes, no other suspected features could be demonstrated. During the preoperative period, diagnosis was complicated by the lack of a specific clinical presentation.

Several case reports have suggested that fine-needle aspiration might have some value in the diagnosis of HL of the thyroid (7). But when FNAC is not used as a main diagnosis, a core biopsy, an incisional biopsy or even a thyroidectomy may be required as in our case, it is decisive to establish the diagnosis and to relieve critical airway compression (1,4,7,8). In our case report, we were limited by FNAC which was non-contributory, no preoperative diagnosis was established and a total thyroidectomy was performed on the basis of a preliminary diagnosis of nodular goitre. The urgency of the operation was due to the compressive symptoms that interfered decisively with our patient life quality. There are not enough randomized studies to support palliative surgery for airway symptoms control, and our case report brings out a palliative reducing size surgery which is the best indication when no quick therapeutic response is noticed with a non-surgical treatment (radiotherapy and chemotherapy) to relieve the symptoms of airway compression. Meyer-Rochow et al. support our point of view and suggested that radiotherapy and chemotherapy can exacerbate the obstructive symptoms in the patient because of tissue oedema, so they recommend considering the palliative surgery in elected patients (9). Sippel et al. reported as well the case of a small series of 27 patients with thyroid lymphoma which showed that a palliative resection has good results when performed by experts, presenting an improvement of the obstructive symptoms in all of them (10). Several studies report that surgical debulking associated with an adjuvant therapy contributed to improving overall survival of the patient (11-13). The overall prognosis of PTL is good, with 10-year survival rates in more than 80% of the patients presenting localized forms. Apart from the definitive morbidity (laryngeal paralysis) related to a total thyroidectomy which rate 10.34% in a study on goitre that we undertook in the same center, we conclude that urgent surgery does not have an influence on the long-term prognosis of the patient. In literature, clinical factors that predict a worse prognosis include only tumor size over 10 cm, an advanced stage (greater than stage IE), a presence of obstructive local symptoms, a rapid tumor growth, mediastinal involvement, age >60 years and elevated lactate dehydrogenase (LDH) and β2 microglobulin levels (14).

PTL is a rare disease and the pre-operative diagnosis is not easy. With appropriate therapy, thyroid HL is associated with favourable clinical outcome and prognosis. Nowadays, chemotherapy (ABVD) and 30 Gy radiotherapy is the treatment of choice in PTL. Surgery is not the first line therapy for this entity but in practice, we recommend surgery when these two prerequisite conditions are present: a severe and painful obstructive symptom, combined with a non-conclusive cytological examination. Thyroid surgery has gained an important role, both for diagnosis and theranostic purposes.

Even if the management of her illness was difficult, the patient was grateful to the entire medical team.

The authors thank the Department of Anatomopathology, CHU-JRA, Antananarivo, Madagascar for the microphotographs of the histopathological examinations.

Reporting Checklist: The authors have completed the CARE reporting checklist. Available at http://dx.doi.org/10.21037/aot-20-15

Conflicts of Interest: All authors have completed the ICMJE uniform disclosure form (available at http://dx.doi.org/10.21037/aot-20-15). The authors have no conflicts of interest to declare.