Indications and contraindications to transoral thyroidectomy

Operations on the central neck, including thyroid surgery, are some of the most common surgical procedures in the United States (1,2). The transcervical approach has been the primary route of access to the thyroid gland since its description by Kocher in the late 1880’s (3). While it provides excellent exposure and a direct access to the central neck, it can lead to unsightly neck scarring, negatively impacting patient quality of life (4-6). The increasing volumes of thyroid pathology especially in young females and a societal emphasis on physical appearances has encouraged the development of aesthetically favorable alternative approaches (7,8). As a result, many minimally invasive techniques and remote access approaches have been proposed, which aim to minimize surgical trauma and avoid visible scarring (9-11). Each attempts to obtain equipoise between exposure and aesthetics, necessitating either a small but visible scar (12) or extensive tissue dissection with a remote but hidden scar (13-20).

A transoral vestibular approach avoiding the floor of mouth was first described by Richmon et al. (21) and modifications of this technique have gained favor with refinement of incision placement via both robotic and endoscopic approaches (22-25). Transoral robotic or endoscopic thyroidectomy vestibular approach (TOR/ETVA) offers access to the bilateral thyroid beds via a gingivobuccal incision without a permanent cutaneous scar (22-28). As such, the frequency at which this approach is being utilized continues to increase (22-36). Although there has been a significant amount of early success with TOR/ETVA, it is important to note that not all patients are candidates. In this review we highlight the indications and contraindications to performing TOR/ETVA as per existing literature from high volume surgeons to date, and aim to resolve differences between authors to provide formal recommendations moving forward.

The English literature was reviewed for articles describing transoral thyroidectomy either via the robotic or endoscopic vestibular approach. Authors whom had completed ten or more cases endoscopically were considered to be high volume, while all articles with human robotic cases were reviewed given the relatively limited amount of literature. Publications that did not give formal inclusion or exclusion criteria for their cohort were excluded (33,37). Inclusion and exclusion criteria for each of these studies were then reviewed and compiled.

TOR/ETVA was deemed appropriate for discussion with patients whom had a history of hypertrophic scarring or were motivated to avoid a cervical neck incision. Additional inclusion criteria across authors accounted for diameter and/or volume of the thyroid, size of the dominant nodule, and preoperative pathology (22-24,27,30,31). Specific inclusion criteria varied some between authors, most notably in regard to size limitations as per preoperative ultrasonography.

Most groups have also included pathologic criteria as an indication for TOR/ETVA. The indicated preoperative pathology cited to date is as follows; benign lesions (cyst, goiter), follicular neoplasms, Bethesda III or IV lesion, suspicious for malignancy, and papillary microcarcinoma or well-differentiated thyroid cancer without evidence of metastasis. Jitpratoom et al. expanded this to include patients with Grave’s disease with at least one of the following: suspicious nodules, toxic multinodular goiter, failure or recurrence after 2 years of anti-thyroid medication, local compressive symptoms, and patients with side effects from anti-thyroid medication. Of note, all patients in this series were euthyroid at the time of the procedure (38). Each group’s inclusion criteria have been summarized in Table 1 (22-25,27,36,38-40). 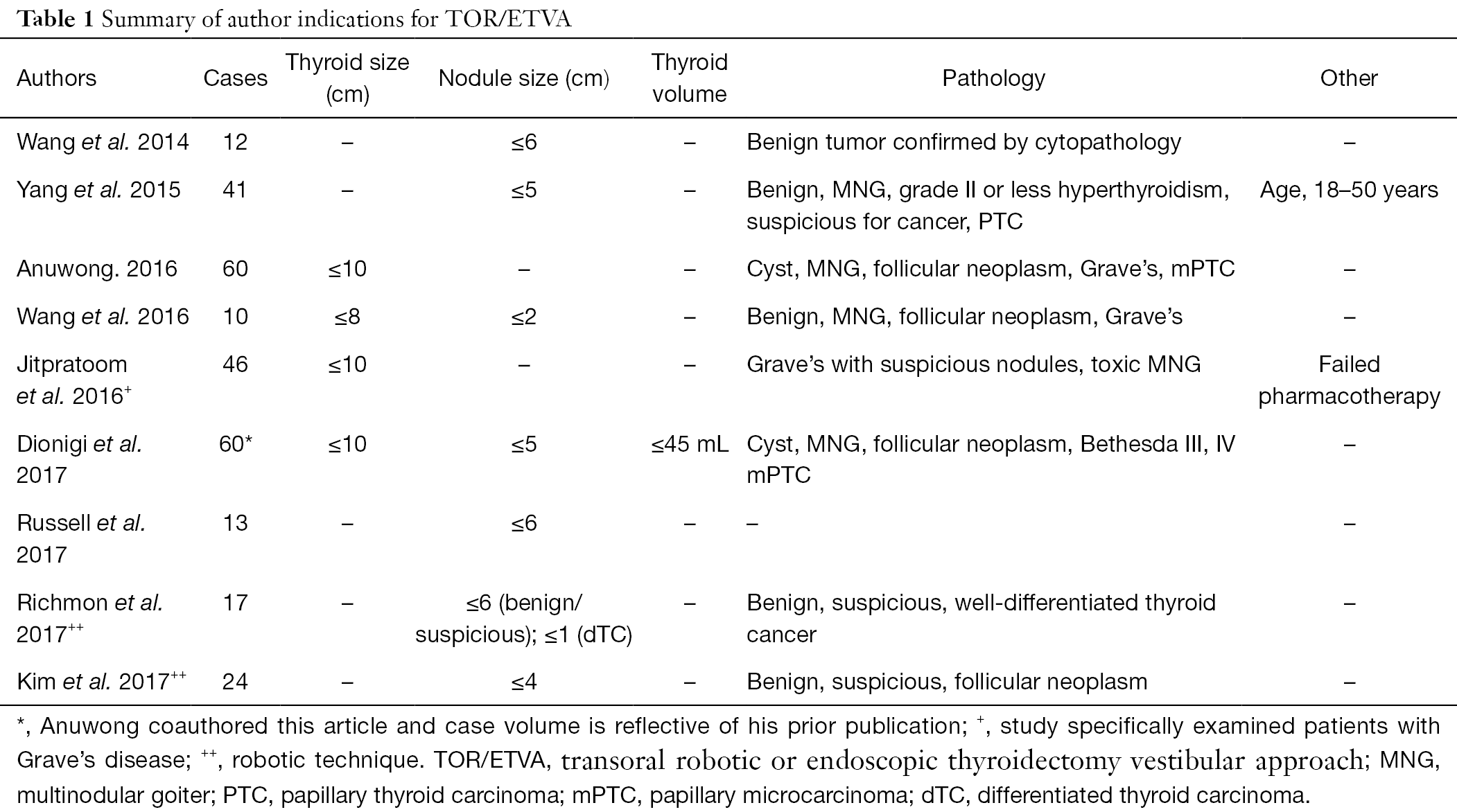 Patients with a history of head and neck surgery and/or head and neck or upper mediastinal irradiation were not considered for TOR/ETVA. Patients whom were deemed unfit for surgery or could not tolerate general anesthesia were also excluded (22-24,27,30,38). Most high-volume authors additionally note that lymph node metastasis and evidence of extrathyroidal extension such as tracheal or esophageal invasion should be contraindications (24,25,27,36,39,40). Dionigi et al. also recommend exclusion of patients with evidence of preoperative recurrent laryngeal nerve palsy, those with recurrent goiter, and those with any evidence of hyperthyroidism (27). Conversely, Yang et al. did not exclude patients with subclinical hyperthyroidism, but did exclude patients whom were younger than 18 or older than 50, a criterion that no other authors utilized per our review (40). Anuwong et al. excluded patients with dental braces in his initial series, though subsequent publications he has authored do not include this as a contraindication, but instead exclude patients with oral abscesses (22,27). Yang et al. excluded patients with a history of jaw surgery and those where there was suspicion for substernal goiter on preoperative imaging (40). In addition to the above, patients whom did not meet the respective size or preoperative pathology inclusion criteria as previously summarized were also excluded (22-25,27,36,38-40).

As the volume of TOR/ETVA continues to increase worldwide, it is important that formal indications and contraindications be established to prevent unnecessary complications due to poor patient selection. In reviewing the literature on TOR/ETVA, there was a lack of a definitive consensus between authors.

Authors agree that the primary indication to performing TOR/ETVA is patient motivation to avoid neck scarring (22-25,27,36,38-40). However, a great deal of variation in inclusion criteria exists. In reviewing each of these values, the case volume of the respective authors, and considering our own experience, it is our recommendation that the following size indications be utilized: thyroid diameter no more than 10 cm and dominant nodule size no more than 6 cm, when benign or indeterminate (Bethesda II, III, IV), and no more than 2 cm when Bethesda V, suspicious for malignancy or confirmed well-differentiated thyroid cancer. Similarly, for pathologic criteria, we recommend the following indications: benign lesions, multinodular goiter, cytologically indeterminate nodules. In carefully selected patients, a surgeon may also consider Grave’s disease, lesions that are cytologically suspicious, and well-differentiated thyroid cancer with the above size caveat. A summary of our recommended indications for TOR/ETVA is found in Table 2. 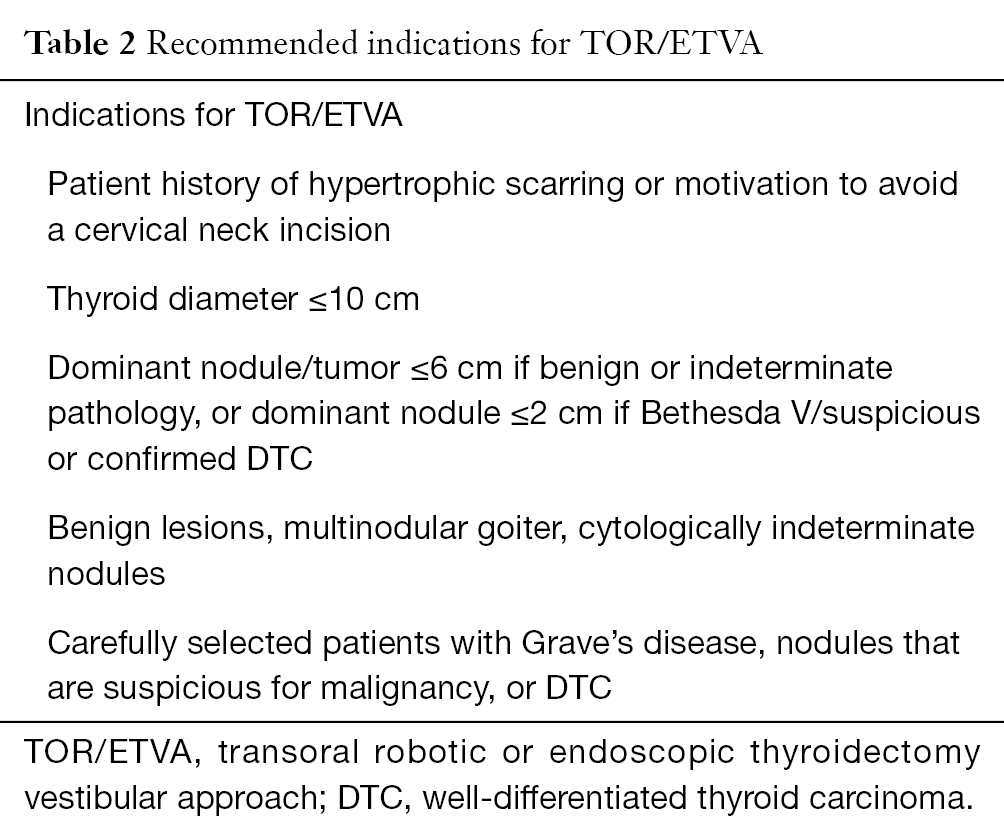 Upon review of the exclusion criteria from high volume authors to date, we recommend the following contraindications; history of head and neck surgery—including mandibular surgery, history of head/neck/upper mediastinum irradiation, patients unfit for general anesthesia, evidence of acute clinical hyperthyroidism, preoperative recurrent laryngeal nerve palsy, lymph node metastasis, extrathyroidal extension such as tracheal or esophageal invasion, presence of oral abscesses, and evidence of substernal thyroidal extension. Chronic lymphocytic (Hashimoto’s) thyroiditis and an elevated body mass index are also relative contraindications that merit extensive patient and surgeon preparation. This is due to the potential increased friability of the gland and greater difficulty with elevating skin flaps respectively. These are in addition to those patients whom fail to meet the inclusion criteria as defined above. These contraindications to TOR/ETVA are summarized within Table 3. Of note, we do not recommend contraindications due to patient age or sex. Furthermore, American Thyroid Association (ATA) Guidelines should be used as an adjunct to the proposed indications and contraindications to determine which patients should undergo total thyroidectomy versus thyroid lobectomy. 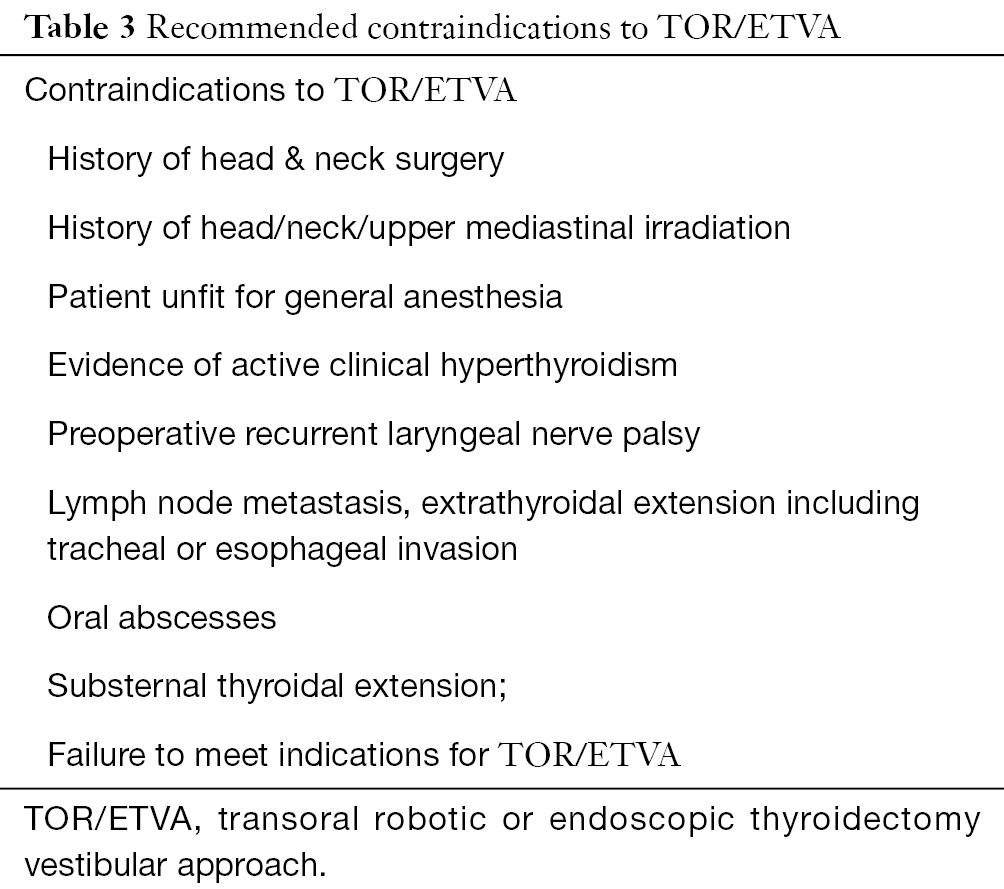