The transcervical approach has long been the primary technique for surgical access to the central neck. Although it provides excellent access to the field of interest, it can result in prominent midline neck scarring. Over the last two decades there has been a strong impetus to avoid cervical neck scarring and the associated negative impact to patient quality of life (1-3). As such, many minimally invasive and remote access approaches to the central neck have been proposed (4,5) including the transaxillary approach, bilateral axillo-breast approach, and facelift approach amongst others (6-10). These procedures, however, require a compromise between exposure and aesthetics (11-18).

First championed as transoral endoscopic thyroidectomy via a vestibular approach (TOETVA), Anuwong demonstrated midline access to the central neck without significant tissue dissection or the presence of a visible scar (19). When utilized for other procedures, transoral neck surgery (TONS) offers direct access to the bilateral thyroid beds as opposed to the lateral or inferior entry point of other remote access approaches. TONS has been utilized successfully in the performance of thyroidectomy, parathyroidectomy, and central neck dissection (CND) via both the endoscopic and robotic techniques (19-26). In this review, we highlight the indications, operative technique, and technical advantages of CND via TONS in comparison to other minimally invasive and remote access approaches to the central neck.

Despite the fact that lymph node metastasis in papillary thyroid cancer (PTC) is seen quite frequently (27), there is a paucity of literature in regards to detailed surgical guidelines for management. Though the American Thyroid Association (ATA) and the National Comprehensive Cancer Network each have guidelines on this topic, they are broad and neither have been endorsed by any surgical organization (28-30). As such, it is challenging to make recommendations as to the indications for CND via TONS. That being said, we base our recommendations on the recent American Head and Neck Society (AHNS) consensus statement for indications for transcervical CND (30) and our own group’s review of indications for transoral thyroidectomy summarized in Table 1 (to be concurrently published with this article).

To consider performing CND via TONS the surgeon must be concomitantly performing a transoral total thyroidectomy. Based on inclusion criteria from prior authors (19,31), and the review of indications for TONS for thyroidectomy by our group, there can be no evidence of clinical or radiographic nodal metastasis if considering this procedure. Therefore, CND via TONS, would only be appropriate if prophylactic in nature, or if there was newly found evidence of nodal metastasis intraoperatively. Per the AHNS consensus statement “routine prophylactic CND is generally not recommended at the time of initial surgery for PTC. Thyroidectomy alone is appropriate for small (T1 or T2), noninvasive, and clinical N0 PTC. A prophylactic CND might be considered for larger (T3 or T4) tumors (30).” However, these authors further state that the utility for any individual patient must be based upon the importance placed in staging information CND may provide the multidisciplinary treatment team. Given that we do not recommended TONS for T3 and T4 disease (22,32), a prophylactic CND may be considered if preoperative workup is consistent with a 2-cm or smaller well differentiated thyroid cancer and the treatment team believes that staging information gained from CND outweigh the operative risks of recurrent laryngeal nerve (RLN) injury or hypoparathyroidism (19,30,31)

A therapeutic CND should be performed if there is evidence of clinical nodal metastasis at the time of transoral thyroidectomy. This may be performed via TONS or a transcervical approach based on surgeon preference, comfort and experience with TONS. Of note, we acknowledge that identification of clinically relevant nodes intraoperatively may be complicated by the presence of thyroiditis, which can lead to an increase in number and size of lymph nodes (33). As such, we recommend that surgeon’s take a history of thyroiditis into account and utilize their clinical judgment when considering whether to perform CND via TONS, in the same manner they would if performing the procedure transcervically. In summary, prophylactic CND via TONS may be considered when the patient is undergoing transoral total thyroidectomy for well differentiated thyroid cancer 2 cm or smaller if the surgeon routinely performs prophylactic CND. Furthermore, if there is evidence of clinical central nodes at the time of transoral thyroidectomy, CND via TONS can be performed or alternatively the procedure may be converted to open for completion of a transcervical CND.

Operative approach is based on the technique described by Richmon et al. and Anuwong for TONS (19,34,35). Patients should be positioned supine and intubated either orotracheally or nasotracheally with a 6.0 or 7.0 nerve monitoring tube based on surgeon and anesthesia preference. Those undergoing robotic TONS, may be placed in the lithotomy position, again depending on surgeon preference for robot docking position. Three incisions are then made in the oral vestibule to accommodate central and lateral trochars for the endoscope or the robot. A central 1.5 cm incision is placed in the midline lower lip at the cranial aspect of the buccal mandibular frenulum and two lateral incisions at the most lateral aspects of the oral commissure in the mucosal border to avoid injury to the mental nerves and minimize instrument collisions (Figure 1). A subplatysmal pocket is then created with hydrodissection, endoscopic instrumentation and mechanical dilators. The flap should be elevated inferiorly to the level of the sternal notch to facilitate comprehensive CND, and laterally to the bilateral sternocleidomastoid muscles (Figure 2). To help maintain appropriate visualization CO2 insufflation is utilized to maintain the working space. Additionally, on occasion a temporary suspension suture is placed through the skin flap to provide a point of external retraction. In our experience this single temporary suture does not result in a visible scar. If the robotic technique is to be utilized, the robot is docked and used for the remainder of the procedure once the subplatysmal flap has been elevated. If not, the procedure continues via endoscopic visualization and instrumentation. At this point, total thyroidectomy is completed via TONS in the usual fashion, utilizing the trachea as a landmark for the identification of the RLN, which is most often identified 2 o’clock and 3 o’clock from the anterior trachea (17,18,20,30). After the respective lobe(s) of the thyroid has been extracted utilizing an endocatch bag, attention may be turned to completion of CND. 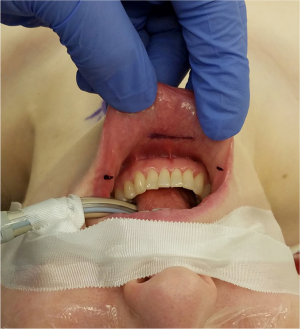 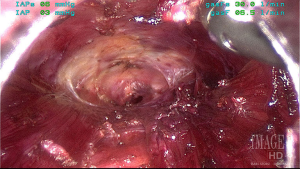 Figure 2 Representative image of the surgical working space. The bilateral sternohyoid muscles can be seen laterally, the trachea midline, and the Maryland instrument seen retracting the platysma and skin flap superiorly.

The surgeon must determine if a unilateral or bilateral CND is to be completed, in addition to comprehensive removal of the prelaryngeal and pretracheal nodes (28). This decision should be made based on disease burden and surgeon practice patterns, considering potential complications such as RLN injury and hypoparathyroidism. A thorough dissection of the right paratracheal subcompartment requires dissection ventral and dorsal to the right RLN, necessitating transposition of the right RLN for complete removal of lymphatic tissue (36). This is in contrast to the left paratracheal subcompartment where the entirety of the lymphatic tissue lies anterior to the left RLN, and extensive nerve transposition is not generally required. As such, if extensive right-sided nodal disease is identified, conversion to a transcervical approach may be warranted. All specimens should again be removed with the aid of an endocatch bag.

The midline approach with TONS provides excellent access to the central neck and all subcompartments. When considering the boundaries of the central neck as defined by anatomic landmarks, superior-inferior thyroid artery (main blood supply to most superior parathyroid glands); inferior—innominate artery; deep (dorsal)—esophageal muscularis; ventral (superficial)—sternothyroid muscle; lateral—common carotid artery, TONS has a considerable advantage over other remote access/minimally invasive techniques in visualizing this space. Specifically, the challenges accessing the contralateral or even the lateral aspect of the ipsilateral paratracheal basin with lateral approach techniques such as the transaxillary or retroauricular approach are mitigated. Furthermore, TONS provides excellent visualization of the bilateral RLN’s near their insertion into the larynx. This view is familiar to most experienced endocrine surgeons, and provides a favorable angle of dissection along the plane of the nerve (Figure 3), and allows for optimal visualization when transposing the nerve on the right, thus facilitating a true comprehensive CND (19-26,34,35,37). Finally, we have found that there is enhanced visualization and magnification of the parathyroid glands with TONS, aiding in their preservations and prevention of hypoparathyroidism, which is of particular concern, given the reported incidence of temporary hypoparathyroidism of 14–40% after CND (38-40). 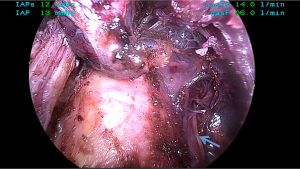 TONS via both the robotic and endoscopic techniques provides excellent midline visualization of the central neck and associated subcompartments, facilitating safe and effective completion of comprehensive CND (17,20). Specifically, the ability to equally access both paratracheal basins and distally identify the RLN at its insertion facilitating an in-plane dissection are significant advantages when compared to other remote access approaches to the central neck. Though we do not recommend routine performance of CND via TONS, it is a valuable procedure that may aid in disease management of surgeons who are routinely performing TOETVA and may intermittently encounter an indication to complete a CND.

Provenance and Peer Review: This article was commissioned by the Guest Editors (Anuwong Angoon, Hoon Yub Kim, Ralph P. Tufano and Gianlorenzo Dionigi) for the series “Transoral Thyroidectomy” published in Annals of Thyroid. The article has undergone external peer review.

Conflicts of Interest: All authors have completed the ICMJE uniform disclosure form (available at http://dx.doi.org/10.21037/aot.2017.10.02). The series “Transoral Thyroidectomy” was commissioned by the editorial office without any funding or sponsorship. Ralph P. Tufano served as the unpaid Guest Editor of the series. The authors have no other conflicts of interest to declare.

Ethical Statement: The authors are accountable for all aspects of the work in ensuring that questions related to the accuracy or integrity of any part of the work are appropriately investigated and resolved.